2016 Honda Accord review | Apple and Android smart Accord 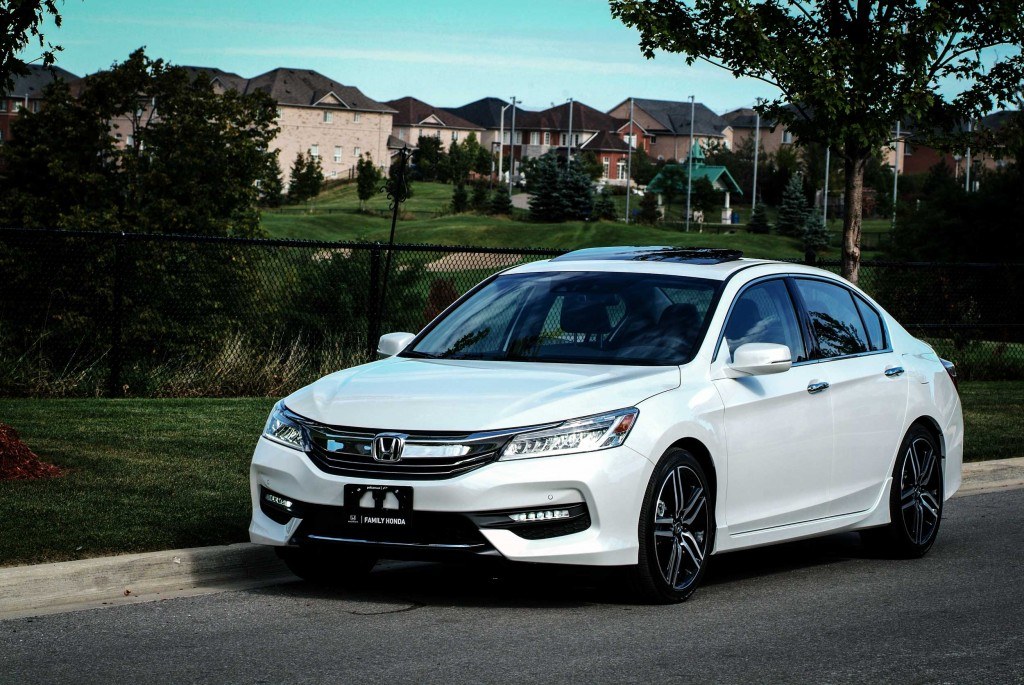 Our 2016 Honda Accord review reveals that while the exterior has received a slight refresh the technology has received an overhaul. The accord has been one of the key vehicle in Honda’s lineup ever since its launch in the 1970’s. For 2016, Honda has launched an updated Accord, which happens to be one of the most tech-savvy in this segment. 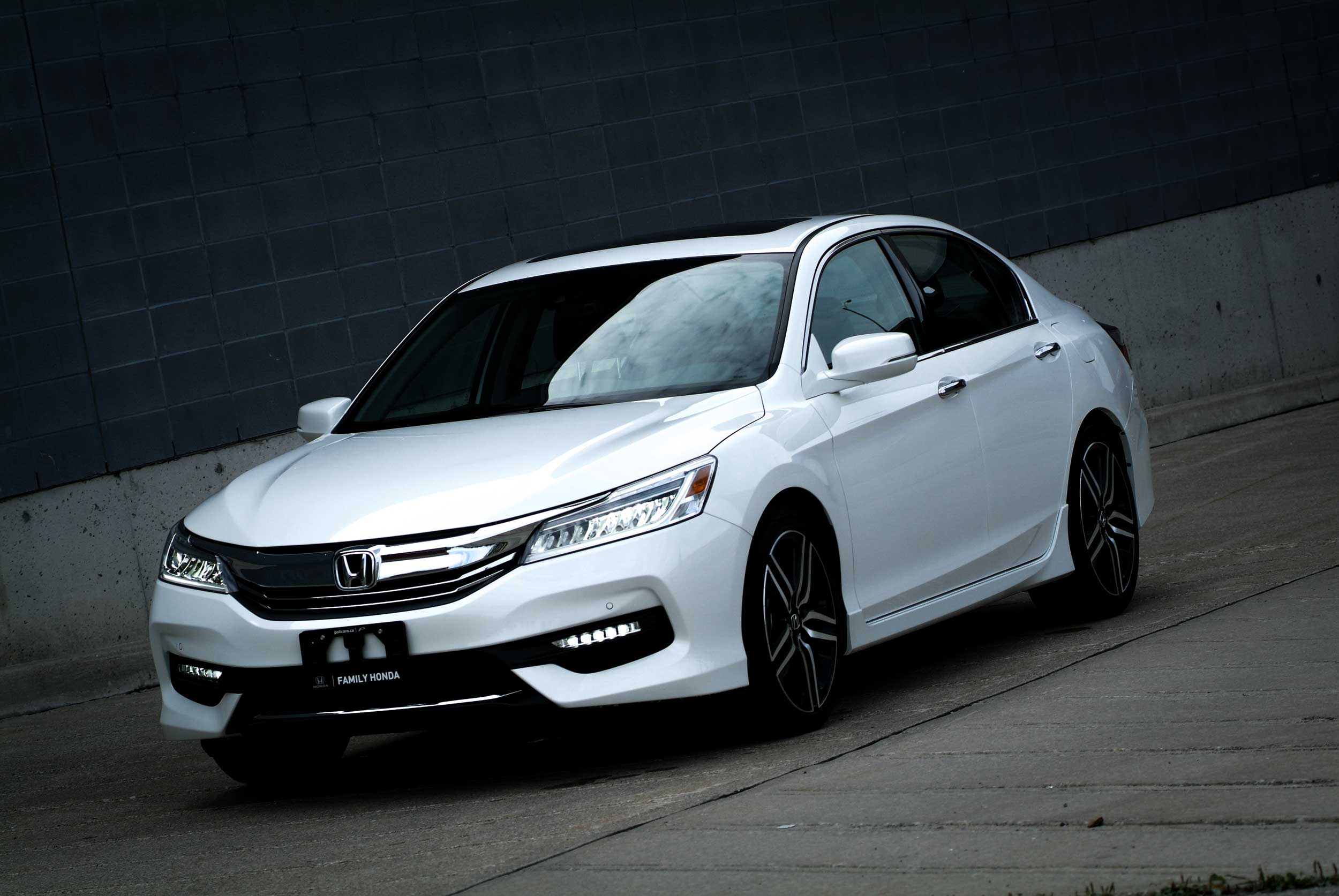 The 2016 Honda Accord is style-wise an evolution on the previous model, with updated front and rear fascias and a few other cosmetic details. Where the model shines is inside with the amount of technology that has been integrated. To check this out, we spent some time at the wheel of atop of the line Accord V6 Touring.

Let’s start with the biggest technological aspect that will have many tech-geek lusting: both Apple and Android systems now work in full integration with the infotainment system. Having Apple CarPlay and Android Auto on-board means users have access to a multitude of new smartphone-enabled functions and features, including navigation (Apple Maps or Google Maps), audio streaming and voice-controlled SMS text messaging.

These Apple and Android features come on top of HD Radio, the expanded application of SiriusXM Radio, Bluetooth HandsFreeLink and Pandora Radio as well as the HondaLink cloud-based connected car system with Aha by Harman and new HondaLink Assist emergency assistance service. Quite a mouthful of tech terms, but thankfully Honda has well integrated all this in a well organized centre dash area comprised of two screens. 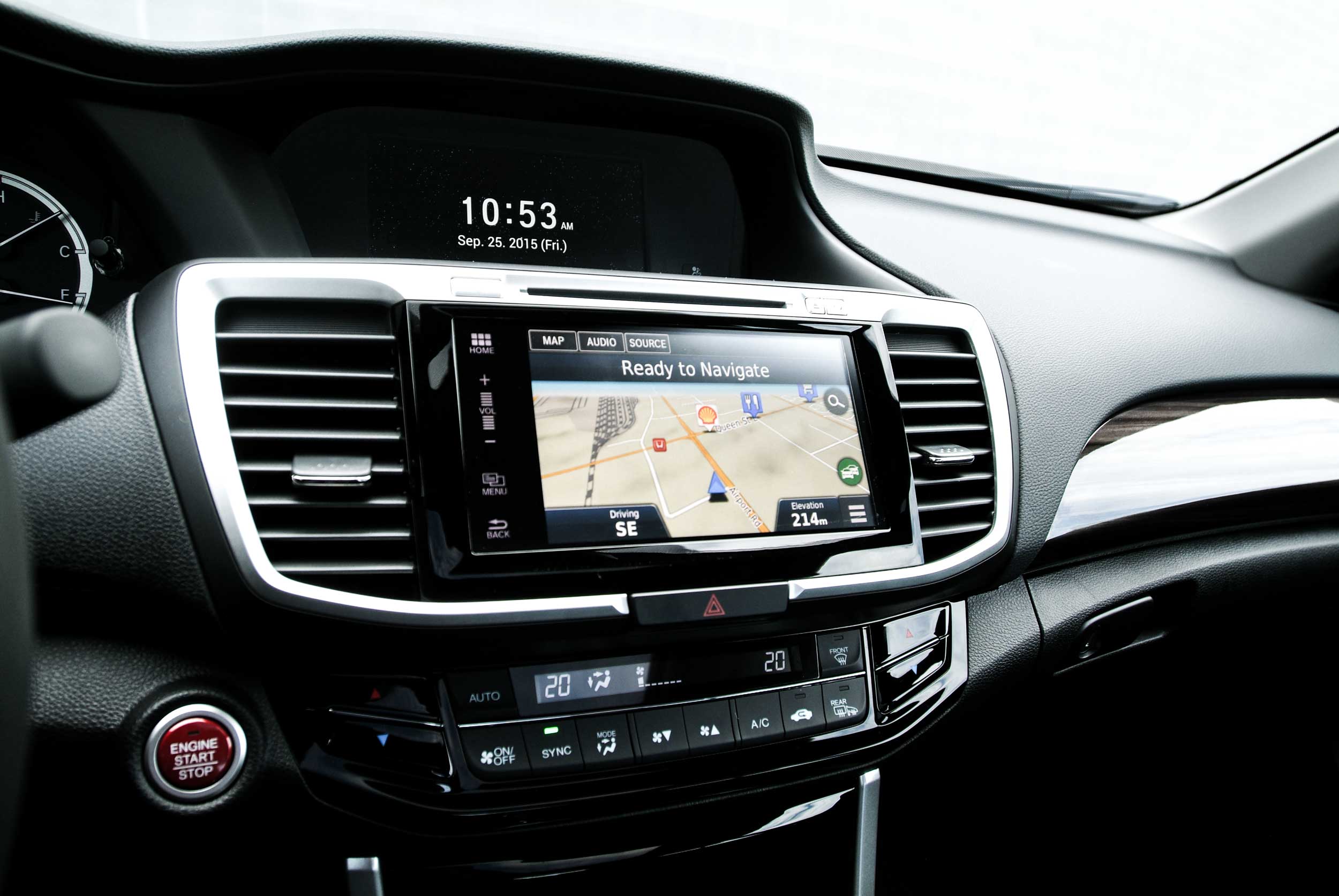 The mid-mounted seven inch screen is known by Honda as the Display Audio system. It features an intuitive touchscreen that lets you swipe, tap and pinch – just like on a tablet or smartphone – to control the vehicle’s audio system, display settings and other advanced features. Icons resembling smartphone apps are displayed on the capacitive touchscreen, making the interface intuitive and easy to use. Interfaces for standard internet-sourced music and media options, such as Pandora can be displayed and controlled on the Display Audio interface, with the ability to create personalized stations, tap to “like” songs, and view album artwork directly from the touchscreen. This touchscreen also serves as the control interface for the new Apple CarPlay and Android Auto connected car systems.

Placed atop this Display Audio system is a 7.7 inch full color “intelligent” Multi-Information Display, refered to as i-MID by Honda, which features trip and audio information, clock and wallpaper functions, a compass on models with Honda navi and turn-by-turn directions when using embedded navigation or Apple CarPlay or Android Auto navigation apps. The i-MID also serves as the display for the available LaneWatch and standard multi-angle rearview cameras and alerts users to incoming calls when paired with the user’s phone.

This technology works in conjunction with a 360-watt, 7-speaker premium audio system that includes a subwoofer and XM Radio, as well as Bluetooth4 streaming audio and Pandora compatibility. Audio information is displayed on the color i-MID screen positioned high in the center section of the instrument panel while a USB Audio Interface that can allow an iPod, iPhone or flash drive to be connected to the system is located lower in the console.

Having spent time at the wheel of a V6 Touring with all these features, I can confirm these are well integrated and work fairly seamlessly.

My original fear was that these would create a lot of distractions for the driver, but I was proved wrong. Honda did integrate these in a manner that becomes intuitive and easy to use after a very short adaptation period, allowing me to enjoy the other aspects of the car.

One of the many aspects this car has that is nice when at the wheel is a great combination of handling and comfort. This comes on the Touring tested aided by the Amplitude Reactive Dampers with variable suspension stroke. These suspension components provide an even more refined ride quality and improved body control during cornering compared to the previous Accord. The Touring trim also gets new hydraulic rear subframe bushings for reduced high-frequency vibration. 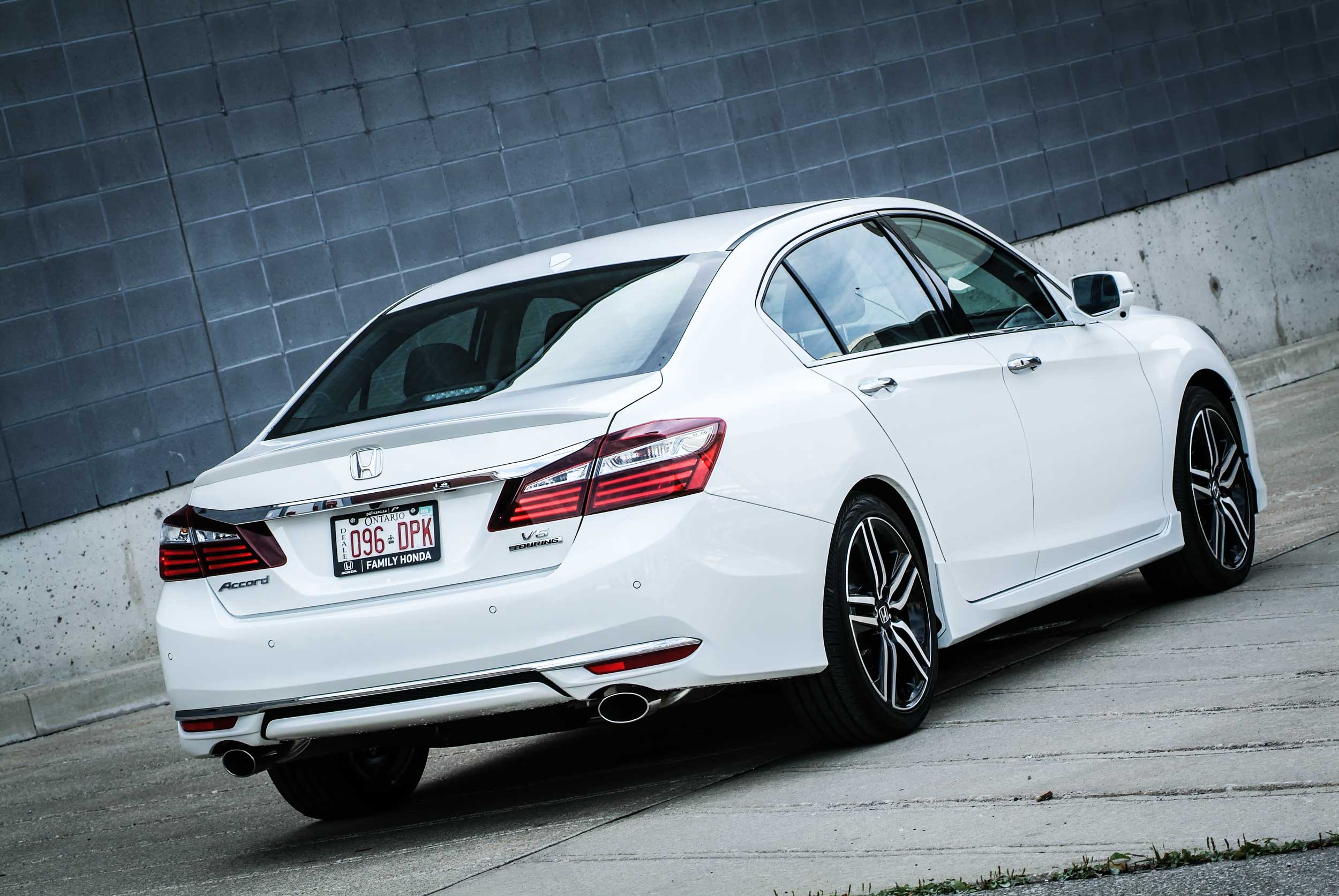 These Amplitude Reactive Dampers operate in two distinct performance parameters: a Ride Zone and a Handling Zone. Each zone has a unique set of compression and rebound damping forces tailored to provide the desired ride and handling attributes. In short, the amplitude reactive dampers operate like two separate suspension systems combined in one. Interestingly, these new dampers are entirely mechanical in operation with no electronics required.

New for 2016 is an electric power steering system using an electric motor to assist the rack-and-pinion steering rather than the hydraulic assist of the previous Accord. Honda states the result is reduced steering effort, improved precision, feel and stability, and less power consumption; my initial impression is that Honda has very well calibrated this system.

This 2016 Honda Accord V6 Touring hides behind its newly profiled grille an aluminum-alloy 24-valve 3.5 litres engine good for 278 horsepower at 6200 rpm and 252 lb-ft. of torque at 4900 rpm. Design features that assist in the efficiency of the engine include optimized intake and exhaust ports, valve timing and Variable Valve Timing and Lift Electronic Control (VTEC) operation, and when equipped with a 6-speed automatic transmission like our Touring tested, Variable Cylinder Management (VCM) with a wide range of operation. 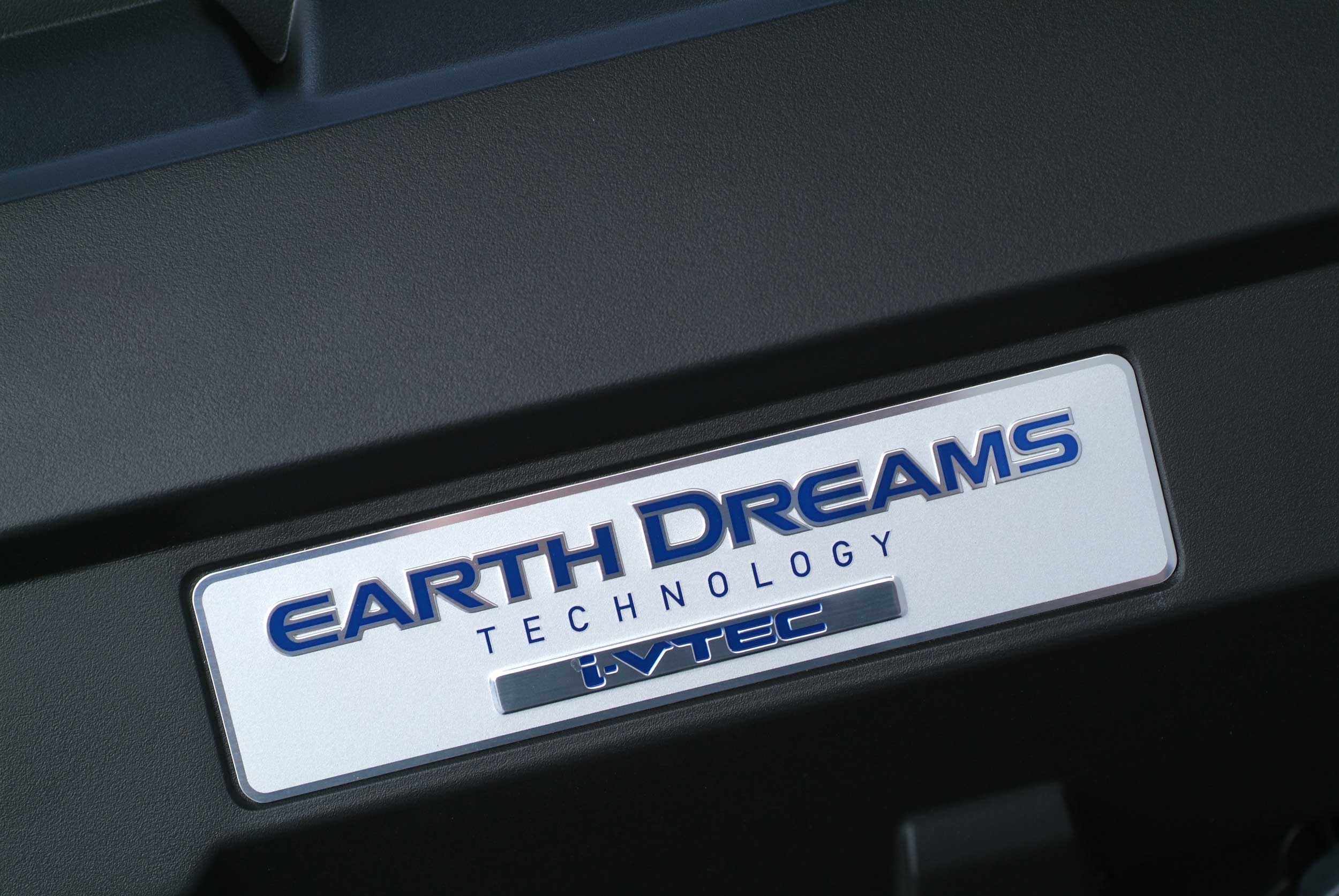 The 6-speed transmission can be controlled by a straight-gate console-mounted shifter or a steering wheel paddle shifter system that works whenever the transmission is in either of its two automatic modes, Drive or Sport.

The power of the engine allows for near sports car performance while the handling is decidedly tuned towards the pleasure of driving when compared to its competitors.

Being a large sedan, space is abundant for the five occupants and the trunk can swallow a good amount of luggage, as is expected from such a family sedan.

Overall, this 2016 Honda Accord V6 Touring is a great every day companion that has been brought up to the forefront of technology for the segment in a way that will allow its owner and passengers to drive and roll while enjoying the modern conveniences now expected in a world where smart phones are the norm.