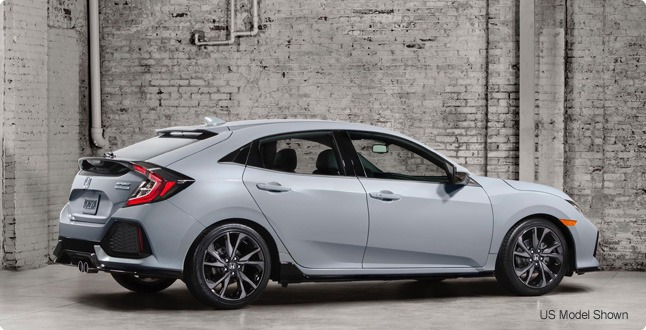 We celebrate the return of a good thing with the 2017 Honda Civic Hatchback.

Canada will finally get another taste of Honda’s “forbidden fruit Civic:” the 2017 Honda Civic Hatchback. The news was announced earlier this month and has hatchback lovers like

It’s been 10 years since Canada or the United States has had the option of the Honda Civic Hatchback. A long-time staple in Europe, the Honda Hatch will arrive in North America this fall and we just know that this “forbidden fruit” is going to taste so sweet.

“We’re bringing back the much anticipated sporty, stylish and sophisticated Civic Hatchback to Canada, as we amp up the performance of our incredible Civic lineup with each new model” said, Dave Gardner, Senior Vice President of Operations, Honda Canada. “The Hatchback paired with the 1.5L Turbo Engine builds on the fun-to-drive characteristics of the Civic that appeals to enthusiasts, new and old.”

We can expect the new hatchback, like the rest of the 2017 Civic lineup, to show off some sharper lines and a more athletic stance. Serving as the basis for the upcoming Civic Type-R, the Civic Hatchback will be available in three trims (LX, Sport and Sport Touring), each boasting a 1.5-liter direct-injected turbocharged 4-cylinder engine producing 174 horses in the LX and 180 in the Sport and Sport Touring. Transmission options include a 6-speed manual, or a sporty CVT.

The Civic Hatchback models, unlike the other Civics, will not be produced in Alliston, Ontario, but rather manufactured in the UK and shipped here. TBH, we don’t mind one bit. We’re just stoked on the opportunity to pop open that illusive fifth door. Say it with us now: