Family Honda | Blog | THE HONDA CIVIC IS AT THE TOP…AGAIN

THE HONDA CIVIC IS AT THE TOP…AGAIN 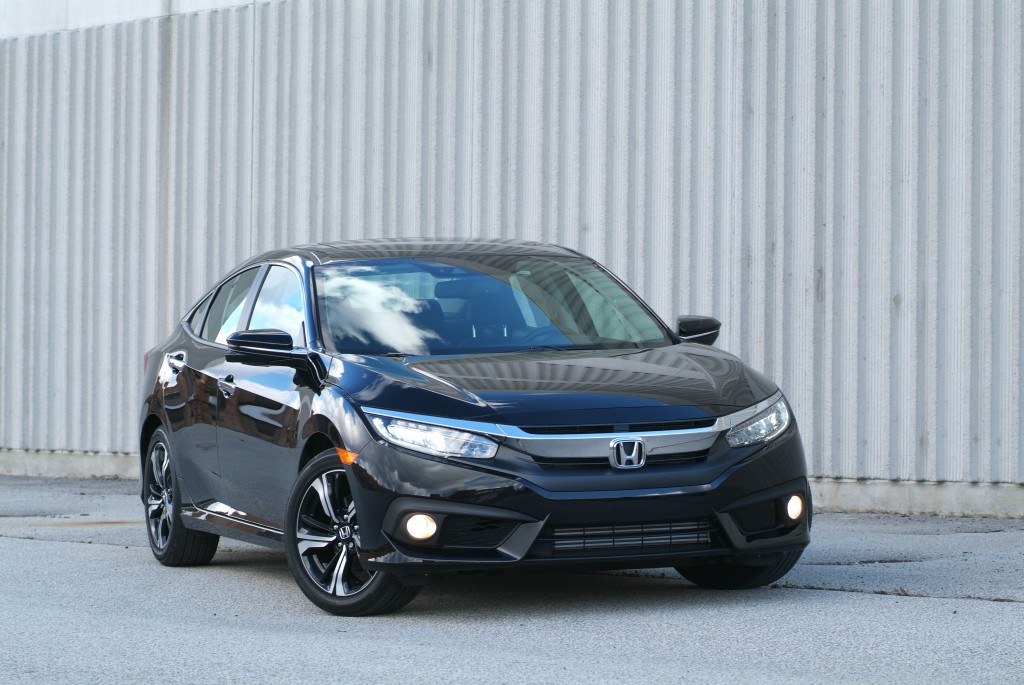 A completely redesigned Honda Civic has arrived for 2016.

Sporting a brand new look, the tenth generation of the best-selling car in Canada for the past 17 consecutive years comes with a host of upgrades including a pair of new engines.

Civic buyers can now choose between a 1.5L Turbo and a 2.0L engine. 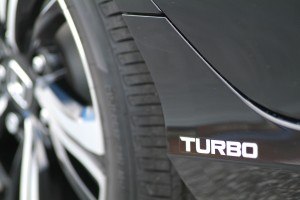 In Honda’s words, virtually everything about the 2016 Civic Sedan is new – an all-new vehicle architecture, sporty and sophisticated new interior and exterior styling, a more spacious and high-quality cabin, two advanced new engines, and a host of new premium features and technologies.

This new generation spurs a new worldwide car; while the development of the Civic Sedan was led by a North American team – a first for Honda and for the Civic – the overall Civic series involves design and engineering teams from Honda R&D, sales and manufacturing operations around the world, especially in North America and Japan, but also in Europe, South America and Asia.

The new four cylinder 2.0-litre i-VTEC engine comes in the Civic DX, LX and EX trims; the new turbocharged 1.5-litre engine is exclusive to the EX-T and Touring, two up-market versions pushing upwards the luxury and equipment limits ever offered by Honda in a Civic.

This 2.0-liter comes either with a continuously variable transmission (CVT) with Honda G-Design shift control, or a 6-speed manual transmission.

The second engine, an all-new turbocharged 1.5-liter DOHC, direct-injected and inline 4-cylinder engine with variable cam timing (VTC) and electronic waste gate, provides 174 hp at 5,500 rpm and 162 lb-ft. of torque between 1,800 and 5,500 rpm. The 1.5-liter turbo engine is exclusively paired to a new CVT that works in synergy with the low-inertia turbo, VTC and electronic waste gate to optimize power delivery across the engine’s full operating range. 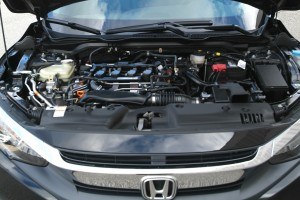 Test driving a Touring version, we found power delivery is great and offers a very dynamic and civilized level of performance. 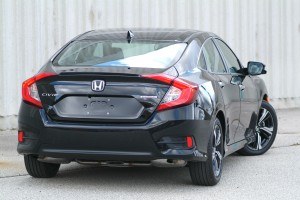 This contributed to a 31 kilograms reduction in unibody weight versus the previous Civic Sedan, despite its larger size and greater stiffness.

To cheat wind, the sleeker body design of the 2016 Civic combines with aerodynamic features, including nearly full underbody covering, front and rear wheel strakes, optimized rear exhaust silencers and a highly aero-efficient engine compartment for what Honda classifies as the most aerodynamically efficient body in the Civic class.

Meanwhile, premium noise-isolating materials and design features have been used to achieve a new level of cabin quietness in the Civic class. This includes the adoption of new methods to measure and reduce air leaks in the Civic body that, based on Honda’s internal test data, is the most tightly sealed body in the competitive class. Full body air leaks have been reduced 58 percent compared to the previous Civic.

The new Civic’s longer wheelbase and wider body results in the most spacious interior in its class. With 97.8 cubic feet of interior passenger space, the 2016 Civic Sedan delivers top-of-class comfort by giving its occupants a sense of spaciousness and premium comfort beyond the compact class with ample headroom, legroom, shoulder clearance and side head clearance.

This extra space is definitely felt up front but also in the comfortable rear seats.

EX and above trim levels incorporate a new 7-inch Display Audio touchscreen that serves as the nerve center for control of audio, HVAC and other functions. The new Display Audio is integrated with new Apple CarPlay and Android Auto platforms, providing seamless integration of smartphone features and functions, including app-based navigation, streaming audio, voice-controlled search capabilities, and access to a host of Apple- or Google-approved smartphone apps. 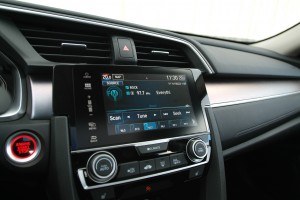 Going further tech-wise, Honda Sensing safety and driver-assistive technology is available and can reduce the potential for a collision and mitigate the consequences, alerting the driver and taking emergency action when a collision is determined to be imminent. Honda Sensing uses both millimeter wave radar and a monocular camera to sense and respond to detected road hazards and is available on all models and trims. The Civic Honda Sensing technology suite includes Adaptive Cruise Control with Low Speed Follow for the first time in a Honda vehicle. Honda Sensing features are as follows:

As a bonus for us Canadians, the Civic is built in Canada, close to home in Alliston, Ontario.

According to first impressions automotive experts have had with it, this new Civic is a winner. As we write these lines, the all-new 10th generation Honda Civic was awarded Best New Small Car by the Automotive Journalist Association of Canada(AJAC), recognizing the from the ground up redesign that boosts a sporty new exterior and interior, two new, uncompromising engines , and a host of technological upgrades.